“Powers such as the elements, the electromagnetic fluid, and to some extent even the akasa principle, are quantities that must not be confused with qualities. Everything representing a power exists, however, materially, although it might have a most subtle form, and must therefore be regarded as matter… Any type of quantity/ power is some kind of matter…

“Mights, virtues, characteristics, abilities are qualities and are not to be confused with powers. Mights of various kinds, virtues, qualities and abilities, whether used in the akasa principle, the mental, astral or material world, may function without the condensation of power or matter, i.e., they may unconsciously become quantities. If this is the case, the increased capacities tend to be somehow realized, thereby quite automatically employing a certain quantity of their analogous power. This procedure always takes place at the cost of the relevant vitality of the mental, astral or material body; sometimes even at the cost of the fate.

“All divine names, all recorded names of angels, archangels, principals, genii, etc., have a quantitative power and a qualitative might — personal qualities, abilities, virtues, etc… Do not imagine the divine name to be a personified spiritual being equipped with the abilities, spheres of operation, etc., assigned to it.

“The total complex of a certain formula represents a personified spiritual being, since the total complex of powers and abilities is analogous to a certain form and is thus identified with a personified being; for otherwise a being could not be represented… The combined letters representing a being are, at the same time, a quabbalistic formula having an analogous connection to powers and qualities or describing the relevant personified being respectively.

“A little exception is made by the Schem-Ham-Phoras, the 72 genii of Mercury, who have a certain connection to the spiritual body. It also contains the mystery of the 72-letter name of God — the longest name of God is identified as the highest mode of expression of the Deity.

“By the name of the 72 genii of the mercury Zone, the qualities of these genii are expressed, but not their quantities, i.e., the power-substance which effects realization in the material plane. The quantities of the 72 genii are given expression by the fourfold key and are manifested in the names of Deities consisting of four letters. The quantitative form or combination of letters always indicates the superior divine name of the respective genius.

“The first genius, Vehuiah, has the power-key-name of JHVH. The genius’ name of “Vehuiah” thus gives expression to the qualitative form; the quantity key or key to the substance of power, on the other hand, is expressed by the fourfold key, the Jod-He-Vau-He.

[ Note ~ According to Paul M., Bardon used the 72 Names of God depicted in a drawing in Athanasius Kircher’s Oedipus Aegyptiacus (1652)

to provide the “Quantity (power) Keys” for the 72 genii of the Mercury Zone in his The Practice of Magical Evocation. The Quality Keys (names) of the Mercury spirits are encoded in the Bible, Exodus 14: 19-21. ] 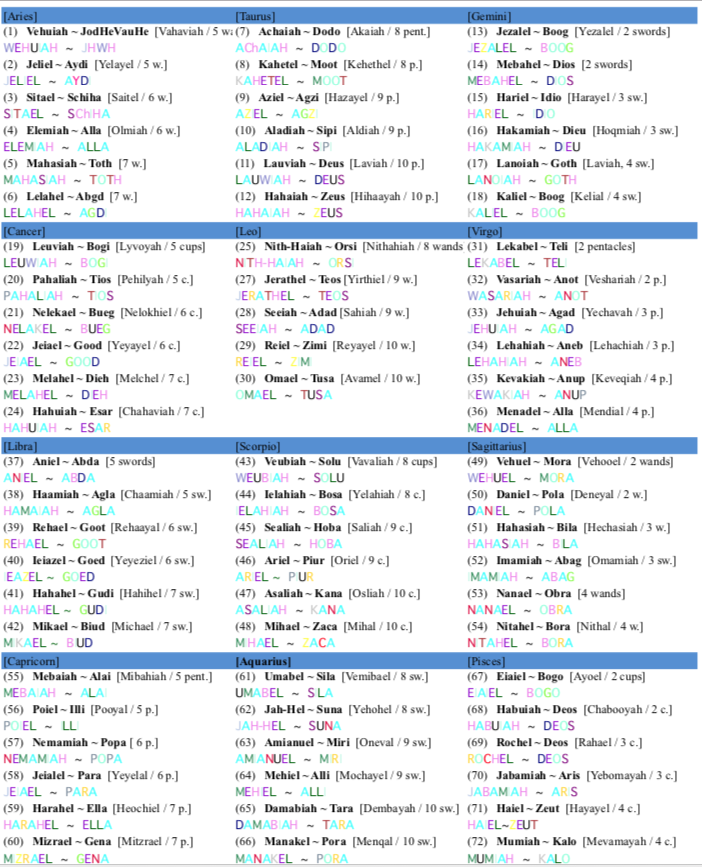